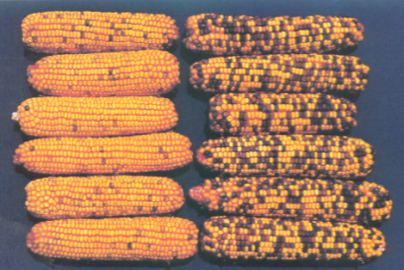 Geneticists study the basis of heritable variation within species. Most heritable differences can be attributed to sequence differences among different individuals that segregate in Mendelian fashion. However, there is also evidence for heritable variation that cannot be attributed to sequence variation. This epigenetic variation can be encoded by differences in the modifications to DNA or histones. One well-characterized example is DNA methylation. In most cases, DNA methylation is correlated with reduced gene expression or activity levels for a particular region of the genome. It is important to understand the relative contribution and role of epigenetic variation to understand how information is passed from parents to offspring. There are a number of projects in the Springer lab and with collaborators (Matthew Vaughn, Shawn Kaeppler, Bob Schmitz, Damon Lisch) focused on studying the causes and consequences of epigenetic variation in crop plants. These include studies of maize plants from varying environments, different genotypes or different developmental stages. We also utilize reverse-genetics approach to study the factors that are critical for DNA methylation and the consequences of altered DNA methylation levels. This research focus also includes studies of other plants species and documenting the relationship between transposable elements and imprinting. This research has been supported by the National Science Foundation.